In 1992, the of the Commissioner Massachusetts Department of Public Health (DPH) envisioned a statewide, community-based framework to forge partnerships between service providers, health departments, residents, consumers, and the general public. The goal was, and still is, the continuous improvement in the health status of communities through collaboration of community members. From this idea, the Community Health Network Area (CHNA) initiative was developed. It began with three pilot efforts and was later expanded to twenty-seven networks statewide. The DPH outlined several principles to guide the GBHA initiative including the focus on health status indicators and their improvement. The CHNAs were also conceived as being inclusive of key stakeholders, reflective of the population diversity of the CHNA and oriented towards the consumer. Furthermore, they should have a commitment to partnership and focus on health promotion and prevention. (A list of the CHNAprinciples is contained in the Appendix.) In practice, CHNA members work collaboratively to develop action plans that address health needs and health status disparities.

Throughout the conceptualization and development of the CHNAs there was discussion about how these efforts could be evaluated over time. In September of 1995, a DPH planning committee began to discuss this subject in more detail. After careful consideration of the literature and examination of the original purpose of the CHNAs, several evaluation goals were identified: documenting activities; collecting baseline data that could be used for future comparative studies; identifying good working models; identifying problems related to the networks; developing strategies for addressing these problems; and sharing information among CHNAsand planning for future development.

Given these overall goals, a large-scale evaluation framework was proposed and presented before an internal review board at various stages in its development. The final evaluation plan included three components: (1) a review of materials each CHNA had sent to DPH (e.g. meeting minutes, mission statements, examples of activities, etc.); (2) a session of facilitated focus groups of CHNA representatives from across the state, and (3) a written, anonymous survey of CHNA 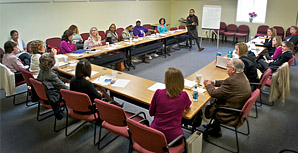